this is a bit of ramble I’m afraid 😉

I was questing away on my nord sorceror last night and I came across a quest that really made me think,  I was in kind of a reflective mood anyway. Anyway, I’ve been playing Eydis (my sorc) as Dimzad has been away and I don’t want my main (nightblade) to get out of sync with him.  While creating her, I decided to change it up and make her old.  I had a sudden realisation that on paper I am all for insisting upon options and fair representation, railing about the age disparities found in our media and the like, yet I continually create young female characters.  Fair enough, some games don’t give you that option but here I was faced with a character creator which gave me a multitude of options and what was I about to do?  create a young and attractive character yet again.  So on an impulse, I gave my Nord grey hair and pushed the age slider about 3/4 to the right.  I think she’s ended up being around the late 50s, though it is hard to gauge given the faux medieval setting.

It was one of the best decisions I’ve ever made, I absolutely love her.  Although I don’t ever properly RP my characters, I do imbue them with likes and dislikes, imagine their motivations and where they fall in the D&D moral alignment grid (my personal default is chaotic good leaning towards chaotic neutral – this classification of morality has stuck with me for a long time now, I’m not sure where I first came across it- it was a single player pc RPG I think).

So I’d been imagining Eydis as an experienced and learned sorceror who has seen her fair share of battles and skirmishes.  As she was older and has presumably seen much needless death, I imagined that she would seek a peaceful resolution where she could but wouldn’t shy from doing what she needed to do.  So… I was kinda mulling this over while I was out questing and I was running through a save the village from a baddy type scenario.  It turned out that the leader of the baddies had been driven mad from grief over the loss of her two sons in war and was turning villagers into daedric slave things.  She was a priestess of Kyne, and from what I can gather Kyne is all about death and glory in battle.  So I felt rather sympathetic towards this woman and I imagined Eydis would too.  As it turned out, one of her sons had actually survived and I was given the option of either going straight to kill her or to go and talk to her son.  I chose to talk to her son.

After telling me what a failure he was and how much he hated being in the army, he then said the above….  Seriously?  I was absolutely going off on one in my head  and I figured Eydis would have had a lot to say to that too.  So I went back to stop her and sighed when I realised the only option I had was to fight and kill her.  However, he turned up towards the end of the fight, prayed to Kyne and promised to return to the war in exchange for Kyne restoring his mother.  So a happy ending after all. 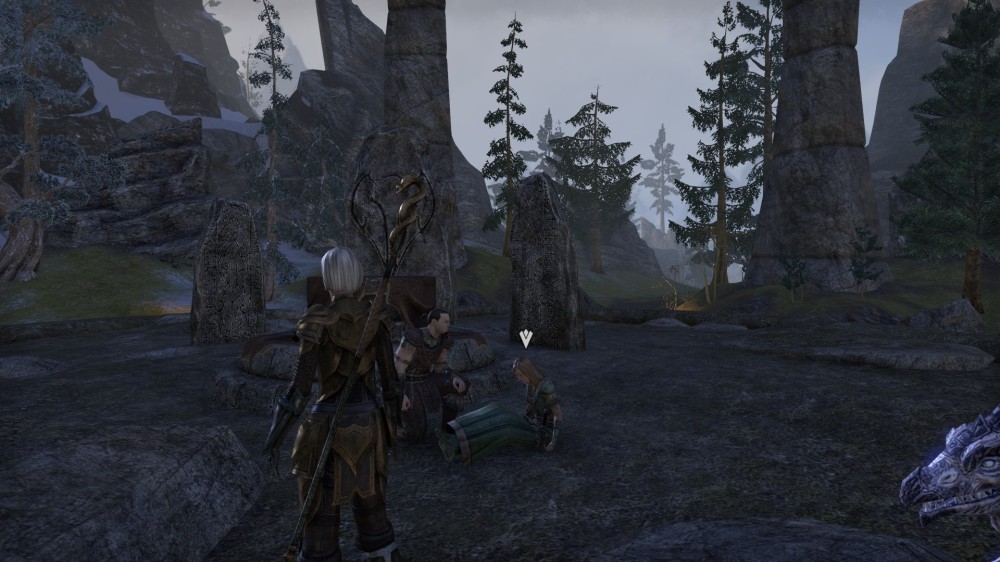 well… not really if you think about it.  I’ve ended up sending a guy back to a war he’d really rather not be in and his mum will be back preaching the glory of war and sending more off to the war effort all the while worrying about her son.  I guess at least this way, they have a chance of surviving and finding peace at some point.