So we’re back to EQ2 for the Erudin Research Halls and this time during The Sentinel’s Fate expansion.

This is quite a fun zone with some interesting fights.  As the mobs are technomagical, its also quite interesting visually and allows for a different feel to the usual fantasy fare.  The first boss was quite fun, he was a Beam Handler and there are 3 of these in the zone with pretty much the same strat.  Basically he has a nasty short range aoe (curse dot) which has to be removed quickly or you die.  Easily avoided though.  When he gets to around 30% health, he becomes invulnerable so you need to click on the beam generator (first pic) which causes him a lot of damage and he becomes vulnerable.  The beam also does damage to you… poor tanky 🙂

The next fun part is the mission impossible corridor.  There are moving beams which you need to disable by placing a mirror in their path (see pic 2).  This was quite fun, obviously we ran many competitions to see who could get the furthest through the corridor without dying…  I think Ashenshugar (pally) did manage it once, with a warden’s HoTs.  We weren’t impressed 😛

The next mob is pretty funny – you basically get catapulted over to the next bit of the zone (and falling to your death is highly likely), you fight a mob which I seem to remember is basically tank n spank BUT little gnomes with jetpacks aim at you and if they land near you, they explode and cause you to fly through the air (usually to your death!).

The first time we ran through the zone, we killed ourselves laughing when we saw a big red button, and the hovertext said Do Not Press (see pic 3).  Of course we pressed it and it causes a big named Deathgazer to appear.  Very fun.

The final boss, Taranis Gazerra, has a pretty tricky strat.  He gets a stackable buff every 5 ish seconds that reduces incoming damage by 8%.  Once he has a lot of these, he needs to be dragged to a pillar to remove the buffs.  There are 10 pillars in total (if I remember correctly), so he needs to be dead by the last one. 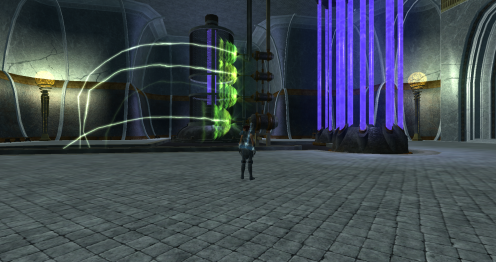 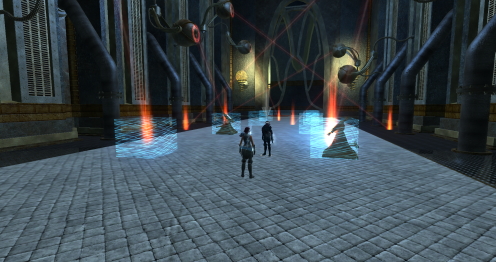 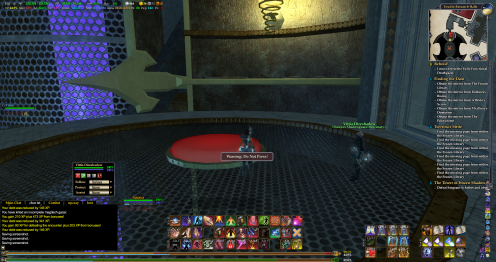 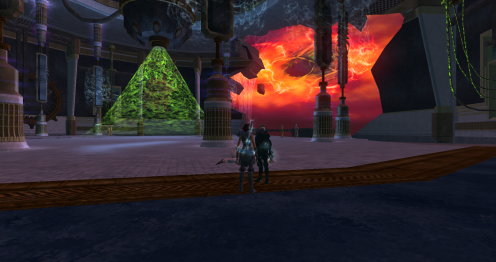 The final boss is behind the pillar

Aside from being visually impressive, with some fun tactics and items, the main reason I have fond memories of this zone is because we ran this zone soon after release as a group of 4.  It is a 6 person instance and at the time pug groups were still insisting on 2 healers and so we didn’t think we stood much chance.  To our surprise we found ourselves progressing through the zone.  It was difficult and we were working out our own strats, but we couldn’t believe we were managing to do it.  Our proudest moment was defeating the final boss as it was quite a dps race and being 2 people short, we did wonder if this was as far as we could get.  However, our tank (pally) managed to survive the damage and not drop aggro, our warden somehow kept us all alive.  Dimzad was on his coercer and I was on my ranger, we pulled out absolutely all the stops to dps him down by the time we got to about the 7th pillar (and I didn’t pull aggro!  amends helped of course).  So yeah good times 🙂