There have been a couple of posts I’ve seen writing about inventory problems (we need the gaming equivalent of house hoarders I think!) sparked from Inventory Full’s writing prompts.

There is so much loot in games and so much of it is redundant.  I’ve stolen enough gems in Skyrim to completely crash the economy, picked up so many gross body parts in lotro, been disappointed by finding so many common shinies in EQ2, got annoyed with the Russian Doll type loot in GW2 (you open a box of loot to find more boxes of loot) and been completely bewildered by my inventory upon return to any MMO. 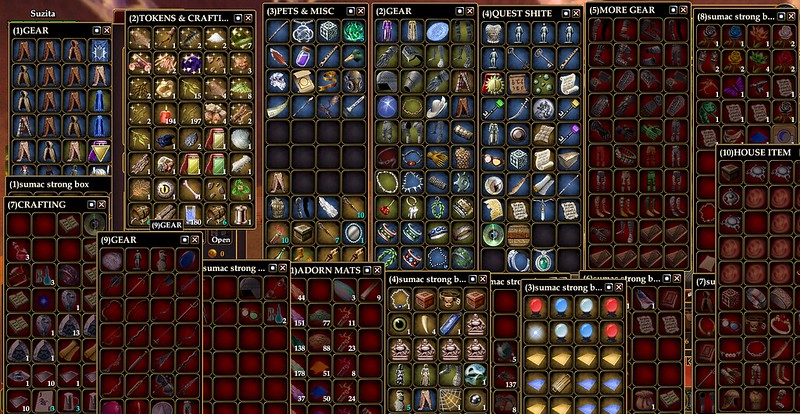 EQ2 banking boxes above, not including my actual inventory or the storage boxes in houses I own

In fact, I have sometimes logged back in after an absence, looked at my inventory (full) checked my bank (also full), and simply logged out rather than face trying to sort it out.

The crafting bag in ESO* really helps as it stores limitless amount of crafting mats (IF you’re subbed) but I’ve still managed to end up with a full inventory, a full bank and the housing storage also full…  It is tempting to think that streamlining the loot system would be the answer but a lot of times, although it’s generally a good thing, it still feels as though the game is becoming less realistic or complex (I remember when EQ2’s coins had weight and I miss the travel rations my Hunter used to need and the pipeweed my LM needed to use in Lotro – I think Dale-men’s Cram could quite happily disappear though)

Similarly, the craft bag idea could be expanded (wallets for currencies and keyrings for unlocks already exist) to separate bags for various items (e.g. food, potions, gear).  However, that does start pushing the boundaries of immersion and to have so many different limitless bags would feel very strange.  Plus I imagine there has to be some tension with storage so as a) they can sell inventory expanders and b) to drive the in-game economy.

Alt mules also work but it’s pretty messy (forgetting what is on which character) and time consuming.  Plus I feel guilty making alts just to stand at the bank…

I think the nicest implementation of inventory management I’ve seen is in the Legacy of the Dragonborn mod (Skyrim).  In the safe house there is an overflowing treasure chest into which you put all the items you want to keep and it auto sorts them into various themed chests (e.g. one handed swords / alchemy ingredients / clothing etc).  I would like to see that in more games.

I think,  ultimately though, the only way to keep on top of your inventory is to be ruthless.  If I’m honest, if they gave me more space – I’d just fill it…

I realised after reading, that I’d actually written about this before (in 2012! on my old blog!) as part of a challenge set by Ambermist

*similar to GW2’s crafting bank except in GW2 the amount is limited.