26. lotro related post of your choice
I think my favourite posts are the Tale of the Red Maid series.  I really enjoyed taking the screenshots and adapting the text of this epic story to a comic book style. 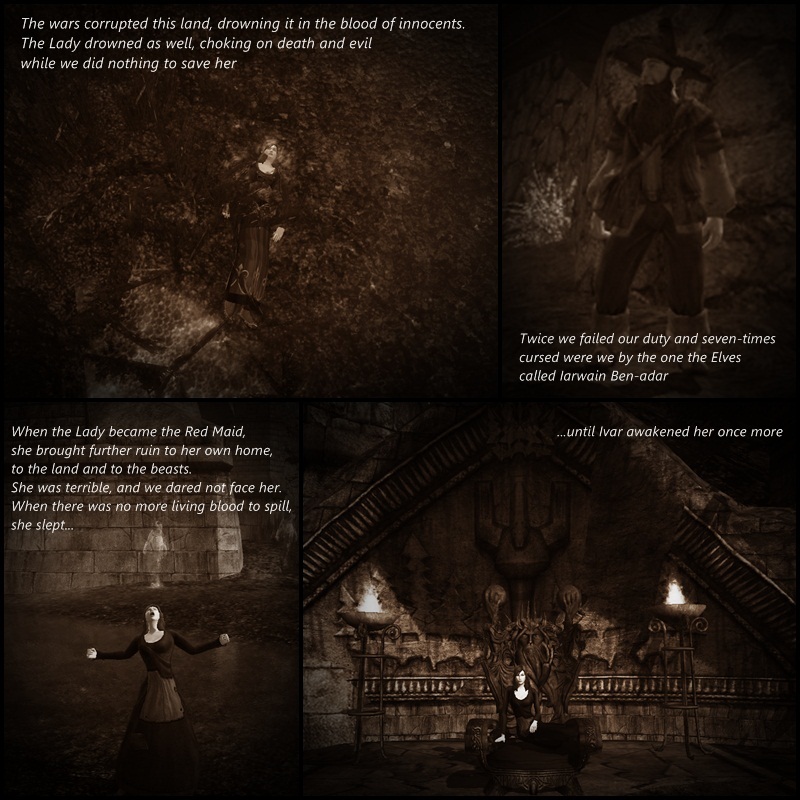 27. which epic would you skip every time?
That’s a difficult question.  I would be tempted to say Volume II because of all the running around, but the story is really excellent.  I’m least tempted to re-do the later epic volumes because I’ve done them recently.  So, I guess I wouldn’t, is the answer.

28. big battles – yay or nay?
I didn’t actually mind big battles and I thought they were quite a good way to tell the story.  Having said that, I do understand the concerns – particularly in regard to not feeling like you were playing your character.   They are very similar to skirmishes, as in they have stages and optional side objectives so  I think if they’d built on the skirmish system they would have been much better received.  I’m assuming there were technical limitations which prevented them from doing that.

29. how many characters do you have, total?
I have 6 which is a reduced number.  I had a great character purge where I decided I only wanted to have one page of characters on the login screen – I don’t know why but one page seems easier to deal with than two.  I slightly failed in that, for crafting reasons, so I have a metalsmith who hides on page 2.

30. what’s the most fun you’ve ever had in the game?
Team Orange nights were always fun (this was myself, Dimzad and Aeowulf), we had that thing going where we generally swept through the dungeons we were doing but in a totally relaxed and jokey manner (we usually had some splishy splash going).  The second time is taking the hobbit through some of the not too scary dungeons – it’s great seeing the game through the eyes of a 9 year old 🙂